Managing Devolution and the Teacher Shortage 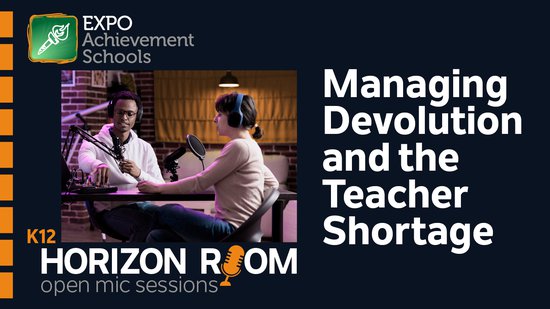 For those of you who are unfamiliar, the Horizon Room Open Mic series is a chance for educators to be a part of a high-profile discussion on the most important issues facing education today.

Your hosts, Learning Counsel Publishing and Research CEO LeiLani Cauthen and CAO Chris McMurray, bring a fun, fast-moving platform that peels away the usual “mediaspeak” to bring you the inside track on real solutions being used by schools and districts.

“Today's topic is going to be managing de-evolution and the teacher shortage,” said McMurray. “De-evolution. It's a heavy word, and it's something that we perhaps have maybe not associated with education, but it's definitely a thing that has an impact on our school systems today. And it will continue to have that impact, as we move into the future, and it can either help or hinder us.”

“What we're talking about here is a process of successive stages of time to an alternate structure,” continued McMurray. “Because if we put this into the educational framework, then what we're talking about is the movement through stages or a process to an alternate structure. So, we're moving from large unwieldy structures to potentially smaller and potentially more effective units. And within that, we've got a couple of issues.”

“To skew a little more color around what you're talking about,” said Cauthen, “we've been studying a lot of structure change as Learning Council research. And one of the things that's been brought to my attention is the fact that California now had an initiative passed in this last year, because they're seeing such a massive loss of students in their districts. They decided to stand up an initiative to open 630 community schools, sort of like the charter world. And then, quite a few other states have been doing really interesting things to create a climate of competition with more smaller units.”

If you look at the whole map of the United States right now,” said Cauthen, “that's what you're seeing is disaggregation to more smaller things. And that includes things like North and South Dakota having a lot of online activity, but those are smaller units, and those students might be 150 miles from a school on a big farm somewhere. And then you have places like Chicago; what's happening with them is a different sort of de-evolution. They have about 20 schools that maybe have a capacity as much as 4,000, but they only have 250 kids in the school. So, their devolution is more like, do we just rent out the rest of the building right now and just use these couple of rooms here, or do we consolidate?”

“Teaching and learning itself is a structure,” said McMurray. “Educational institutions as a structure are in the middle of a sea change. And we're going to be in that change for a long time. 2030 is probably a conservative number. So, with that in mind, let’s go to our first caller.”

First caller: “I think a real challenge for us is the way we've always done it, and not being able to see the benefits and how we can make it work and not being bold enough to actually take those leap and try to do it. Or, we just keep holding onto what we've had and the world is passing us by…”

You won’t want to miss this fast paced, hard-hitting discussion with guests from around the country. Be sure to click on the link and listen to the show. And check the schedule so you can be a part of future shows.